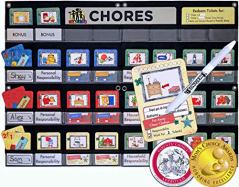 This highly adaptable chore chart features see-through pockets so you can see what's left undone. Plus, you'll never need to pick dropped magnets up off the floor.

Designed for up to 3 children. Flexibly allows you to reward some chores and simply give reminders for others. Includes 34 different self-care options and 54 chore cards. Cards sit in pockets; they don't depend on magnets. Includes reward tickets.

Large chart with lots of cards can be heavy on a wall. Can be tedious to manage. 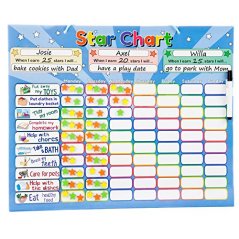 Use dry erase markers or included magnets to mark this hanging chore chart. Easily remove one name plate if you have a 2-child family.

Hang from nail or hook on a wall. Designed for up to 3 children, but extra name plates are removable. Can mark with magnetic stars or dry erase markers. Colorful. Rewards are featured near the top. 12 chore option magnets. Includes pictures for pre-readers.

It can be challenging to remove the magnetic stars from the packaging. They may slip off the board when bumped. 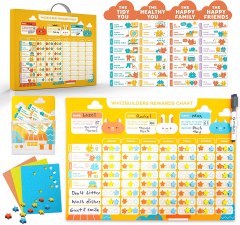 A versatile magnetic chart with plenty of chore options, and it provides space to write in your own child-specific tasks.

The magnets could be stronger, and they may fall from time to time. No way to attach to non-magnetic surfaces. 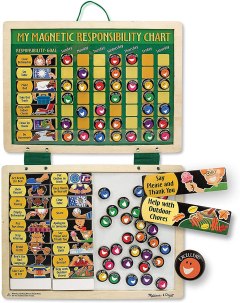 Instead of a storage pouch, this chart includes a secondary board, making magnets easier to access.

Made from dry erase boards connected with fabric hinges. Hang from nail or hook. Includes 90 magnets for chores, behavior, and tracking progress. Hangs on a string (not magnetic). Unused magnets stay attached to the secondary board instead of a pouch or packet.

Goal is not prominently featured. Designed for only one child. The wooden frame warps relatively easily. 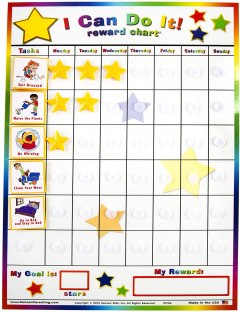 This chart gives you mounting options with both magnets and hanging tabs.

Designed for use with a single child. 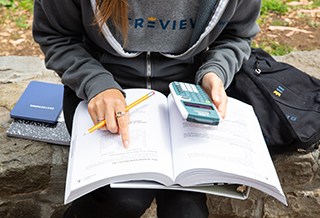 There’s a lot to handle around a busy household. This creates a great opportunity for parents to teach kids responsibility through chores. Many parents use chore reward charts so kids can see their duties and track their progress.

Don’t let the word “reward” fool you; chore reward charts are more sophisticated than purely positive reinforcement through prizes. For one, they keep everyone in the loop about task status and let families swap or change chores with ease. They aid in daily and weekly scheduling and encourage kids to develop time management skills. You’ll also notice that chore reward charts feature kid-friendly colors and designs. This is far superior to a boring handwritten list on the refrigerator, which could be easily overlooked.

To improve delegation and organization within your family, invest in a chore reward chart. This buying guide gives you an overview of popular styles along with tips to help you find the right one for your family. 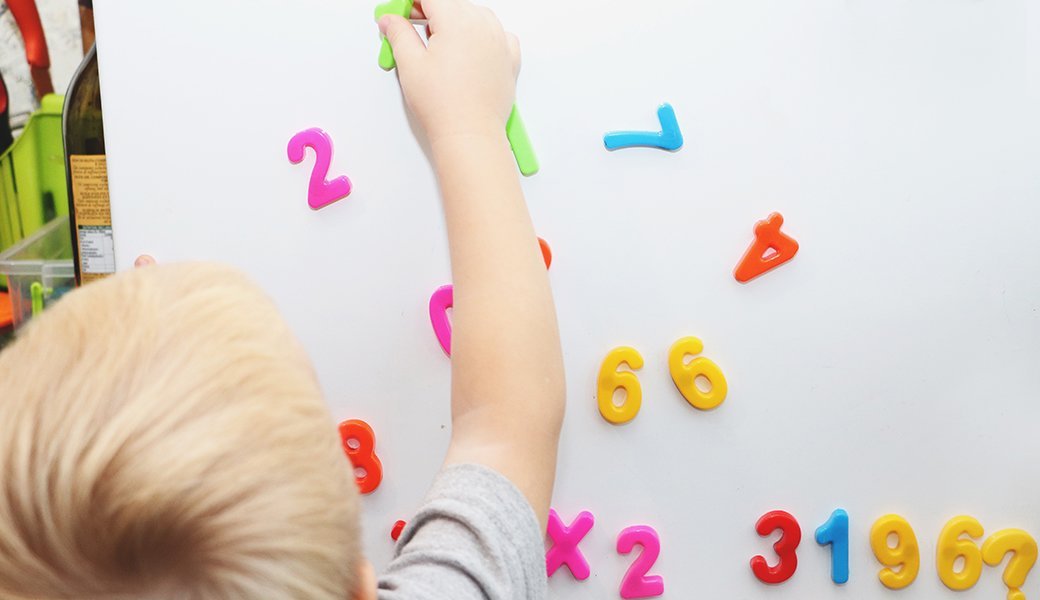 If you like the magnetic pieces for your chart but feel they’re a bit too weak, consider gluing on some stronger magnets.

Chore reward charts are displayed in high-traffic areas so all household members can see them. They’re often found on refrigerators, in entry halls, and in kids’ bedrooms.

A chart hung on the refrigerator requires magnetic backing. Poster-style charts may need to be mounted with adhesive tabs or tape. There are also sign-style charts that can be hung the same way you’d hang a picture frame.

To track progress and stay on top of tasks, many chore reward charts employ a point system. Kids apply a sticker or a magnet or check off a box to indicate they’ve completed a chore. Some charts also offer superlative or cumulative rewards. For example, a child could win recognition for a status such as “Most Chores Completed” or “Weekly Winner” with this type of chart.

Dry erase board charts are usually write-and-wipe posters. You’ll need to invest in dry-erase markers if they aren’t included. These products tend to have the least amount of information printed on them, providing maximum flexibility for customization. The layout consists mostly of blank boxes, often color-coded to improve visibility.

Pocket charts are soft boards with slots, or pockets, in which you place cards. Pocket charts have one of two basic layouts: kids pull cards and collect them in their name pocket as they complete tasks, or kids have several name cards which they place in “duty pockets” across the board as they complete them.

Magnetic boards have layouts that let you drag and drop pieces. In some sets, you can write names and specific duties. Other sets come with pre-printed pieces, so you’re limited to the chores the company has chosen. Something to keep in mind with magnetic boards is that you get what you pay for. Poorly made magnetic boards often have weak magnets that fall off.

"Consider hanging the chore reward chart at your kids’ heights rather than yours. This makes it easier for kids to reach and engage with it. "
STAFF
BestReviews

Chore reward charts feature various iterations of calendars, which can be weekly, monthly, or weekday (Monday through Friday). Weekly and weekday calendars are the most popular, as it’s more realistic to plan for a week than it is a month at a time. Those who prefer monthly charts often buy them for older kids whose specific duties may occur only once or twice a month, such as raking leaves or cleaning the fish tank.

It seems like a no-brainer that names appear on chore reward charts, but some don’t list them at all. This is usually because the chart is intended for a single child and gives families a more customized overview of responsibilities and achievements. Charts with spaces or pieces for several names are intended to track progress for multiple people, including siblings and other members of the household.

Chores are displayed on charts by way of magnetized pieces, peelable stickers, or cards. On some charts, the chore labels are actually printed or affixed to the board.

One thing to keep in mind with this type of chart is that the included chores could vary considerably. Some include around a dozen common chores, whereas others offer up to 40 options. If you’d like to customize chores, it may be best to choose a dry erase chart or one with pieces that can be customized.

No two charts depict rewards the same way, so keep that in mind if you’re looking for more of a visual representation of accomplishments. In some charts, the reward is simply the sticker or indicator that a chore has been completed. The reward, in this case, is seeing the chart fill up. In other charts, there is a dedicated area for rewards that can be filled up with stars, stickers, or tally marks.

In terms of tangible rewards beyond the chart, that is a personal choice for each family. Some families leverage the chore reward chart to keep kids on track toward earning their allowance. Others establish a point system in which kids can redeem points for treats or staying up later.

If you’d like a chore reward chart that promotes goal-setting, invest in one that features a dedicated area to write goals. Only some charts have this feature, and even then, it varies from product to product. Some charts have a few lines for kids to write out sentences, whereas others have a box in which kids can state how many points or stars they aim to earn that week.

Dry erase set: Arteza Whiteboard Set
Invest in a quality dry erase set for your chore reward chart. We like this one from Arteza, as it includes a colorful assortment of fine-tip markers. It also comes with a nontoxic cleaning spray and eraser.

Reward stickers: Avery Removable Stickers
If your chart calls for peelable reward stickers, consider these from Avery. The package includes over 1,000 labels in four colors, which can be printed with a laser or inkjet printer.

Chore reward charts typically run between $10 and $80. Charts with high levels of customization, as well as those made from better-quality materials, tend to cost more.

Inexpensive: Many simple poster and magnetic charts cost between $10 and $30. Quality can be hit-or-miss, and the design is often a simple one.

Mid-range: If you’re willing to spend between $30 and $60, you’ll find higher-quality magnetized charts as well as a variety of pocket charts. These products offer more in the way of customization, and they tend to last much longer.

Expensive: If you look in the highest price range, $60 and above, you will find mostly pocket charts with fine detailing. The cards tend to feature high-quality images and are printed on heavyweight cardstock. 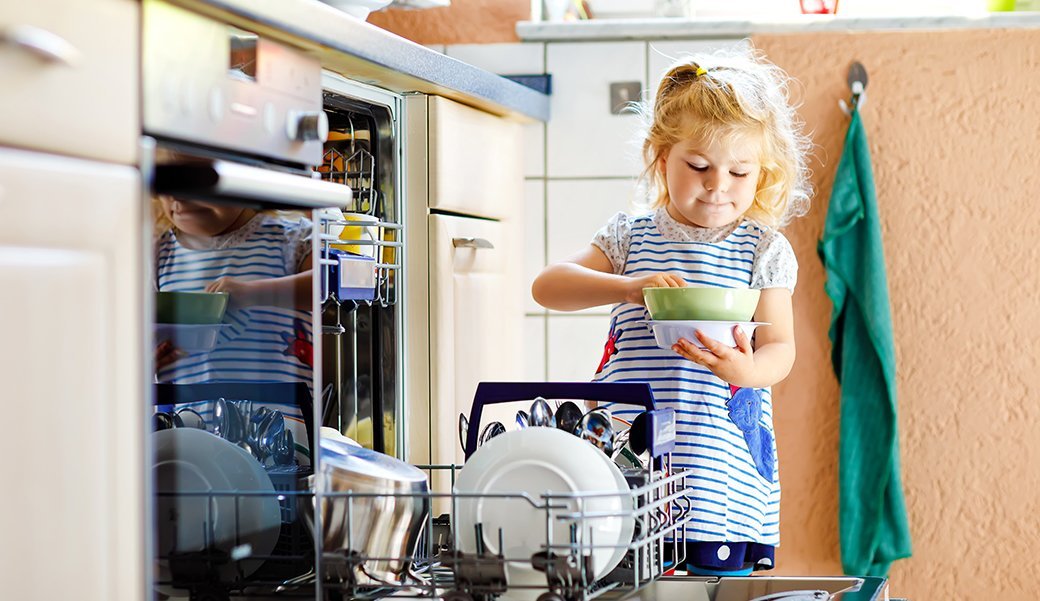 If a wide age gap exists between your children, it may be advisable to buy an age-appropriate chart for each one.

Q. What’s the difference between a chore chart and a behavior chart?
A. Chore charts focus on actual tasks and responsibilities with clear due dates. Earning rewards on these charts is relatively black and white: either the chore has been completed or it hasn’t. Behavioral charts, on the other hand, require ongoing work and dedication. Rather than isolated tasks, like taking out the garbage, the chart is performance-based as it pertains to respect, manners, or anger management.

Q. Does it matter which chore reward chart I get for my kid, or do I need to buy an age-specific one?
A. Most chore reward charts are suitable for kids of all ages, though some may appear “babyish” to older kids. As long as a chart displays the essential information, you could theoretically use it. Some families make choosing the chore reward chart a group effort so everyone feels involved and connected to it.

Q. I lost some magnetic pieces to my chore reward chart. How can I replace them?
A. One option is to contact the manufacturer and inquire about replacement pieces. Some companies will send you replacements at no cost, whereas others will charge you for the pieces plus shipping. Another option is to use a different set of magnets. You could use any magnet set you like, though there are sets geared toward educational use that may work especially well. 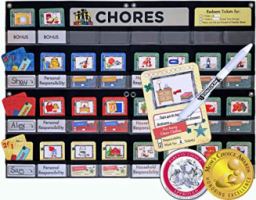 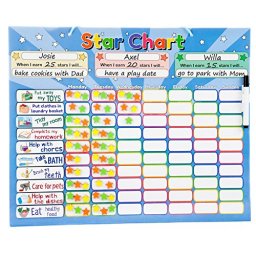 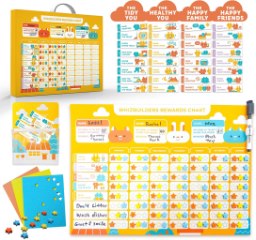 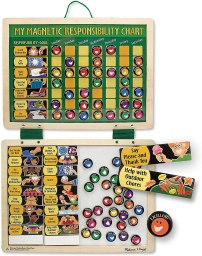 Top Pick
Melissa and Doug
Magnetic Responsibility and Chore Chart
Bottom Line
Instead of a storage pouch, this chart includes a secondary board, making magnets easier to access.
Shop Now 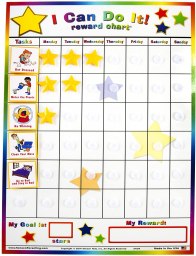 Top Pick
Kenson Kids
"I Can Do It" Reward and Responsibility Chart
Bottom Line
This chart gives you mounting options with both magnets and hanging tabs.
Shop Now