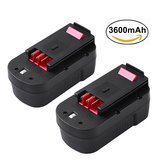 Performs longer than some OEM options and works with most cordless power tools including tree trimmers that require lots of power and a lengthy charge. Usage is bolstered by the second battery.

May not fit with 100% of all BLACK+DECKER cordless tools. 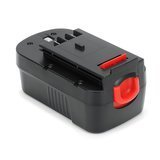 Engineered for those hard jobs, yet works great with the fun ones too.

This 3-pronged device contains not just power, but built in temperature protection as well. Reviews suggest the product arrives as expected and holds its charge for high-intensity jobs. Also great for regular household products.

Minimal information regarding long term use and effectiveness. 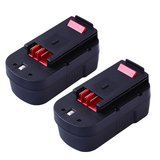 Engineered for landscape equipment and comes with 2 batteries to double the performance.

We love that this pack comes as a pair, extending the power twofold. Positive reviews for compatibility and ease of use. Works as expected. Ideal for light work around the yard. 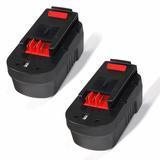 Strong charge that holds up even with old machinery.

High marks all around for its durability and ability to meet most's expectations. Charges efficiently with a BLACK+DECKER charger. Reviews suggest this charger is just right.

Minimal complaints in regard to its ability to hold a charge. 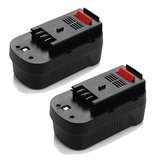 A great fit for those with an army of power tools.

Known to hold its own, staying charged for a complete yard makeover from edging to leaf blowing. Likened to original batteries. Works effectively with 18 volt BLACK+DECKER products.

In the event your battery doesn't meet expectations, a great customer service team is standing by.

BLACK+DECKER is a popular power tool manufacturer, known for the quality and durability of their products. However, the lifespan of any battery is finite, and there will come a day when you need a new battery for your power tools.

You can purchase BLACK+DECKER batteries to replace your old ones, but they often come at a high price — original equipment manufacturer (or OEM) parts are almost always more expensive. Aftermarket batteries are more affordable, but finding quality batteries that fit your tools can be a challenge all its own.

Today, most of the aftermarket replacement parts are as good as or better than the original OEM parts, and many manufacturers list which specific BLACK+DECKER products their batteries are compatible with. Aftermarket batteries are often less expensive since you’re not paying for the name brand.

Keep reading our buying guide, and we’ll walk you through what you need to know about replacement batteries for BLACK+DECKER tools. 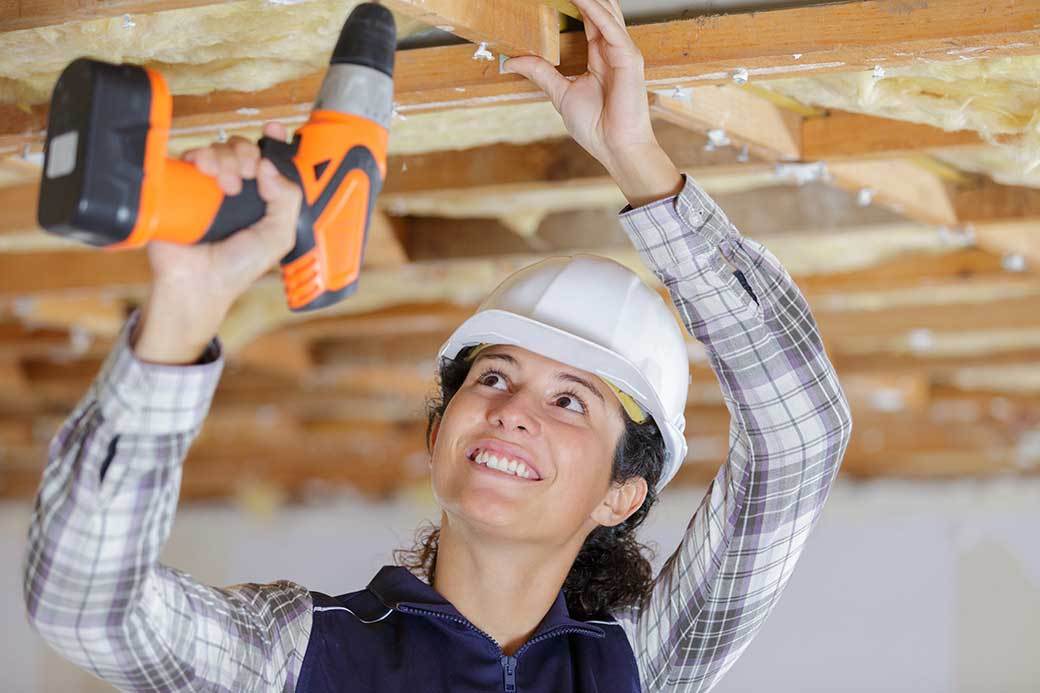 Note that 20V Max and 18V batteries have the same voltage. The “Max” simply refers to the maximum amount of voltage the battery will store when it is fully charged.

BLACK+DECKER’s cordless power tools typically use either 18V or 40V batteries, and your replacement battery should match the voltage of the OEM battery, whether you go with a BLACK+DECKER model or an aftermarket model.

BLACK+DECKER or aftermarket batteries should always hold a charge as long as the OEM originals while providing an equal amount of power to the tools.

Many aftermarket options actually exceed the OEM batteries on both counts. Take note of the capacity (measured in milliamp hours, or mAh) claimed by the manufacturer, but also read a few customer reviews to get an idea of whether the replacement battery will outperform the original. 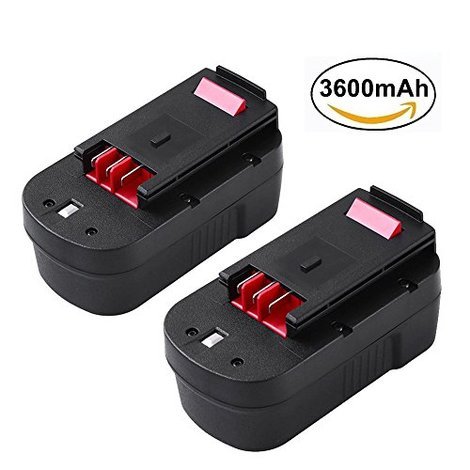 If you need a replacement battery for your 18V B+D cordless tool, look no further. The Topbatt is affordable and long-lasting, and many owners say it’s better than the original battery that came with their B+D tool.

The outer casing on all replacement batteries is the same hard plastic and the same metal prongs. The main differences are on the inside.

BLACK+DECKER uses nickel-cadmium batteries, abbreviated to NiCad, in their 18V batteries. They were first invented in 1899, but they’ve been improved considerably since then. These batteries are used in a wide range of BLACR+DECKER power tools and are known for their fast charge times and low-temperature functionality.

These batteries can be recharged an impressive number of times, though every battery has its expiration date — as you certainly know. NiCad batteries also contain toxic metals and are difficult to dispose of safely, and they lack the power of other rechargeable batteries.

Most aftermarket batteries are nickel-metal hydride, abbreviated NiMH. Research didn’t begin on these batteries until 1967, and it was 20 years before they were released in 1987.

These batteries generally boast high capacities and are unlikely to overcharge or over-discharge. In addition, they do not contain toxic metals.

NiMH batteries can be expensive, and they are not always compatible with BLACK+DECKER chargers. Their power will cut suddenly rather than slowing to a trickle, which may be a perk or an annoyance, depending on the tool you are using.

You probably know this battery type from your smartphone or laptop. This ubiquitous battery type is found in BLACK+DECKER’s 20V and 40V batteries and is known for its high capacity and ability to be recharged again and again. In addition, these batteries will hold their charge for long periods without use — a great thing to have in the battery of a power tool.

Batteries release energy through chemical reactions. The reactions are often exothermic; that is, they generate heat as a byproduct. Some replacement batteries may have built-in temperature protection to extend the lifespan of the battery.

One of the most important factors is whether an aftermarket battery will fit in your array of 18V or 40V tools. Aftermarket manufacturers are well aware of this concern and will often list compatible BLACK+DECKER power tools. In the event that you receive an incompatible battery, you should contact the manufacturer, especially if they listed your particular BLACK+DECKER tools as compatible.

Once your batteries are fully charged, store them in a cool, dry place. Batteries don’t respond well to temperature extremes. Many garages can become extremely hot during the summer, making them a poor choice for battery storage. For the best results, store batteries indoors.

Inexpensive aftermarket batteries are available for $18 to $25. These are usually single-pack replacement NiCad batteries. As long as you are comfortable with an aftermarket battery, there are many reliable products in this price range that may work well for your needs.

Moderately priced aftermarket batteries cost between $25 to $30. These are mostly two-packs of replacement NiMH batteries that deliver solid performance and reliability.

Maintaining the charge at or above 70% will help extend the useful life of the battery. NiCad and NiMH batteries should be recharged about once a month when they’re not being used, but don’t leave them in the charger once they’re fully charged.

Repeatedly charging your battery without using it will depreciate the life of the battery. If you’re not going to use your cordless power tools on a regular basis, you’re better off getting the corded variety. Otherwise, you’ll wind up replacing batteries faster than you intended. 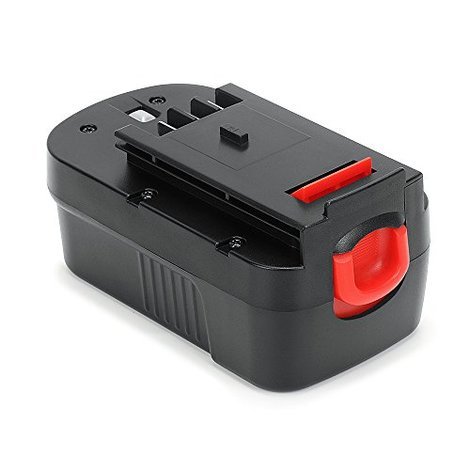 This NiCad battery includes multiple safety features to prevent battery overload, incorrect voltage, and internal overheating. It replaces a large range of 18V batteries, including the BLACK+DECKER Firestorm series, providing just as much power as the originals. It recharges quickly and delivers good performance.

If you didn’t find the right replacement battery for you and your tools, we have a few other recommendations to consider.

The OHYES BAT 18V Replacement Battery for Firestorm Cordless Power Tools fits in string trimmers, hedge trimmers, and drills, among other cordless power tools. Many users have commented that it seems to last longer than the original batteries from BLACK+DECKER. It recharges quickly and delivers excellent performance.

We also like the Biswaye 2-Pack Battery for Black+Decker Outdoor Cordless Power Tools. It also fits the Firestorm system, charges quickly, and delivers a fade-free power that is more powerful than the original batteries. It works in cordless trimmers, drills, and weed eaters. However, this is a NiCad battery that is a little more expensive than some other aftermarket batteries. 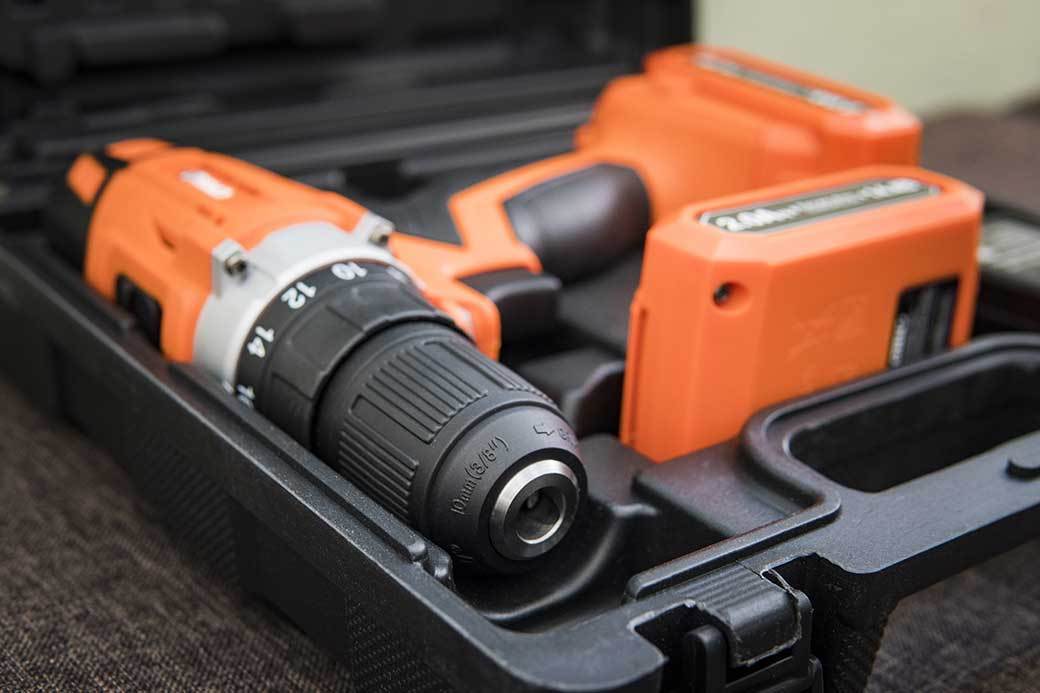 Q. Will using an aftermarket battery void the warranty of my BLACK+DECKER tools?
A. No. As long as you only use batteries whose voltage matches the OEM battery, you will not void the warranty.

Q. How long will an 18V battery last during use?
A. The runtime of most 18V batteries is about 50 minutes of continuous use.

Q. Can I leave the battery on the charger when it’s not in use?
A. No. Overcharging the battery can damage it and shorten its useful life.

Q. Are rechargeable batteries sealed and safe to use in the rain?
A. No — as with any electric equipment, there is always a risk of damaging the equipment or electrocuting yourself if you use power tools in the rain. 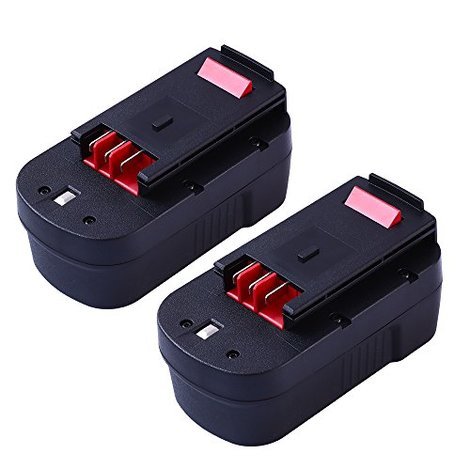 Engineered for landscape equipment and comes with 2 batteries to double the performance. 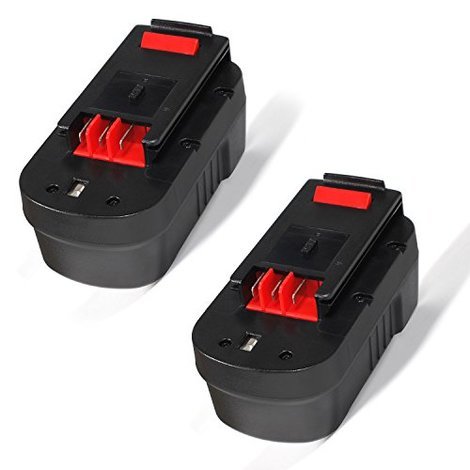 Strong charge that holds up even with old machinery.

Engineered for those hard jobs, yet works great with the fun ones too. 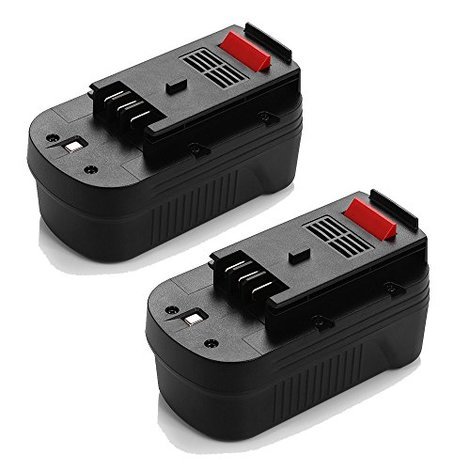 A great fit for those with an army of power tools.