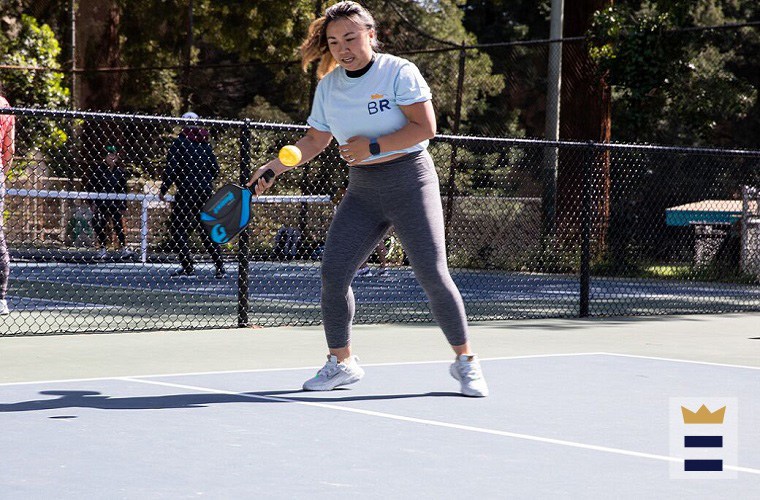 A complete guide to getting started playing pickleball

It’s easy to underestimate an activity with the name pickleball. However, as the fastest growing sport in the United States, it’s clear that pickleball is more than just a sport with a funny name. While it was once an activity played mainly in retirement communities, people of all ages are developing a love for pickleball.

With its newfound popularity, there’s a good chance you’ll get asked to participate in a game of pickleball. It’s also an excellent, low-impact exercise for people of all fitness levels. So, if you’re curious about this trending sport, here is a complete guide to getting started playing pickleball.

While it’s a unique sport, many think pickleball is a combination of a few other activities, including tennis, Ping-Pong, and badminton. For instance, pickleball is played on a court similar in size to badminton with paddles slightly larger than Ping-Pong paddles. When played, however, pickleball looks a lot like tennis since you hit the ball back and forth over a somewhat shorter tennis net. However, it’s played with a plastic Wiffle ball with holes, which doesn’t bounce as much as tennis balls.

Pickleball was invented by three men, Joel Pritchard, Bill Bell and Barney McCallum, who were searching for a cure to their boredom. They grabbed a few pieces of equipment from their shed, including a perforated ball and table tennis paddles, and headed out to their badminton court. After a lot of trial and error, pickleball was eventually created. How to play pickleball

Pickleball is a recognized sport, which means it has official rules determined by the USA Pickleball Association (USAPA) and the International Federation of Pickleball (IFP). Before you play pickleball, here are a few rules you should know.

Faults are moves that cause the loss of a point. A fault is committed when:

To properly play pickleball, you will need a court, net, pickleball paddle, a pickleball and appropriate apparel.

If you plan to play in official pickleball games or tournaments, you’ll need a USAPA-approved paddle. However, beginners and casual pickleball players don’t need to worry about choosing a regulation-sized paddle and should choose one that’s most comfortable.

With a paper honeycomb core, graphite face, and widebody shape, this paddle is designed for superior ball control. Also, the handle mimics the shape of a tennis racket, giving tennis players a smooth and familiar transition into pickleball.

Since it’s USAPA-approved, this paddle can be used casually or in sanctioned pickleball tournaments. It features an elongated face, honeycomb cushioned ergonomic grip, and a 25% thicker core, which combine to give a high-level performance.

This pickleball paddle combines a state-of-the-art fiberglass face with a thick polypropylene X5 core to provide superior ball cushioning and unmatched ball speed. It’s also tested and approved by the USAPA for all pickleball events.

Pickleballs are generally designed for either indoor or outdoor play. You’ll also need USAPA-approved balls to play in official tournaments.

This pack includes 12 USAPA-approved X-40 outdoor pickleballs. Each ball is built to last on outdoor courts and features 40 precisely drilled holes for a balanced flight pattern.

These pickleballs are USAPA-approved for sanctioned indoor or outdoor tournament play. The optic green ball offers high visibility in all lighting and is expertly balanced with its two-piece construction for consistent play.

A full-court pickleball net is 22 feet wide and 36 inches high. However, many casual players use a half net, which is only 10 feet wide.

With a steady metal interlocking frame and high-quality knotless net, this system is built to withstand any environment and weather. Plus, the measurements meet official pickleball guidelines, and it comes with a durable carrying bag.

If you’re searching for a portable pickleball net that is easy to set up and tear down, this system features a carrying case and snap-together metal frame. It also has wide legs with a bent design that will stay put in windy conditions.

When choosing pickleball shoes, avoid shoes designed for running since they lack the side-to-side support needed for stability while playing pickleball.

These pickleball shoes are lightweight and feature special EVA cushioning and support. They also feature a rubber outsole for complete durability on the court and a drag guard on the outsole to protect against abrasions.

From a trusted brand, these shoes are engineered with forefoot gel technology for superior impact absorption. This pair also has strategically positioned outsole flex grooves to better accommodate side-to-side movement.

Get this sling bag if you want to be like the pros, as it’s the official bag of the US Open Pickleball Championships. It can hold up to six paddles, pickleballs, and other related accessories.

Women looking to travel to their pickleball events in style will love this duffle bag with a designated paddle case. It also features a water bottle holder, phone pocket, pickleball pocket, and an additional compartment for other accessories.

This pickleball set includes a half-court net measuring 10 feet by 3 feet, two USAPA-approved X-40 balls, and two paddles. It’s ideal for beginners, training, or casual games at the family picnic and is perfect for travel.

This set makes it a breeze to travel with your own pickleball equipment. It comes with four wooden paddles, four balls, and a mesh carrying bag. With a one-year warranty, the company will fix or replace any issues with the seven-ply maple wood paddles.